DESCRIPTION OF THE FAILURE

As always our approach is to propose solution found through understanding the mechanics of failure. A railway vehicle antennae raft is cantilevered the bogie transom by 4 M16 bolts. The bolts had repeatedly failed in service and was considered a severe hazard as a detached raft could in a worst case scenario derail a train and result in loss of life. MoreVision were invited to investigate the failure. The bolt samples were sent to a metallurgical laboratory and examination of the bolt fracture surfaces showed all the characteristics of a fatigue failure. The bolts were renewed every month as a risk mitigation action until the investigation reported its conclusions. MoreVision initially performed bolt fatigue calculations using the loading assumed in the design case. The calculations did not predict a bolt failure so it was suspected that the actual service loads were greater than that assumed for design purposes. Another possibility was that some element in the bolted joint was relaxing giving rise to loss of bolt pretension and a premature fatigue failure. 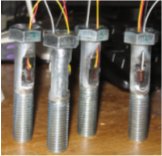 After disappointing performance with commercially available bolt sensors MoreVision devised and produced special test bolts by introducing flats on the shank of the bolts and attaching standard linear gauges (photo on the left). The bolts were calibrated in a laboratory load cell shown in the photo on the right.

The data acquisition equipment and computer were installed in the drivers cab. A test route of over 200miles was considered representative of normal service. It was even possible for the train to remain in service as the data was acquired which helped the client maintain his train availability and service levels.

POST-PROCESSING OF TEST SIGNALS
1) FILTERING NOISE
When all the train systems were started up in the depot it was noticed that some noise was picked up by the strain gauges. The characteristic of this noise was very high frequency (greater than 500Hz). The hammer test has shown that the predominant structural frequency was less than 50Hz so frequencies of over 200Hz were taken out using software filters.
2) DAMAGE CALCULATION
The filtered signals were the assessed using rainflow counting techniques to reduce the signals to stress histograms. The fatigue life could be calculated from the stress histograms.

CONCLUSION
Local vibrations due to the resonant response of the raft resulted in higher levels of load than was assumed in the design loadcase. This gave rise to a premature bolt fatigue failure.