This crashworhiness assessment considered re-engineering the front end of a leading vehicle in a train to improve vehicle crash performance. The study provides an interesting comparison between a vehicle with no provision for crashworthiness (unmodified) and one with a 2MJ collapse structure on the leading vehicle (modified). Which train would you rather be in? The top one or the bottom one? Now play the video and see for yourself the benefits of the designing for crashworthiness. The article outlines the calculations for the train end crash structure. It considers kinetic energy and its conversion to strain energy and compares resulting forces and deceleration rates of the two trains. 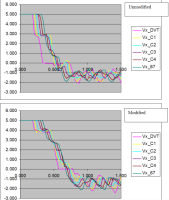 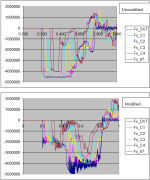 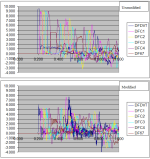 The 1D Analysis Model - This analysis considers GM/RT 2100 Issue 4 crash scenario 1 (similar trains impacting with a closing speed of 60kph). A dynamin model has been developed for this crash assessment. To maintain client confidentiality the vehicle is referred to as the EUKV. The loadcase starts when the train is travelling at 5m/s and is 2m away from the wall. Initially a time step of 10ms was considered over a period of 3 seconds. Finally the analysis was re-run with a time step of 1ms over the first second (as the impact is pretty much over within this time).

Determine the Model Parameters - The calculation above determines the material properties that are assigned to the LSDYNA elements to model the mass and crush behaviour of the EUKV, coaches and loco (driving the train forward from the rear - see Figure 1).

Basic Energy Calculations - The model parameters and verification calculations are set up using Excel (see Figure 1). The script for model generation and initial conditions is generated from the Excel worksheet too so that a number of scenarios could be quickly assessed.

The natural frequency of the train vibrating as a rod is calculated because this can be observed in some of the time history plots in the results section (see Figure 1). The train travels 0.2 s before impact with the wall, the structure deforms during the impact and then recoils backwards vibrating at this frequency. The combined load defection characteristic of the complete train is easily constructed from its constituent parts. The plot above shows the load defection characteristic for the modified train which includes the crash structure fitted to the front end of the EUKV. It also calculates the area under the curve for each straight line segment (i.e. the energy absorbed). It is interesting to note that only small amounts of energy are absorbed by the elastic deflections and the majority of the absorption occurs when the structure plastically deforms. Once the crash structure is fully collapsed the main structure begins to be plastically deform with the resulting loss in survival space for passengers and increase in compression loads.

Two simple calculations are presented below to estimate the loss of survival space for the unmodified and modified trains. The calculation serves to present the basic mechanics to aid understanding of the problem (see Figure 2).
Results - The results are presented first for the unmodified EUKV and then the modified EUKV.
Velocity - Figure 3 compares the velocity (m/s) vs. time. The train travels at 5m/s for 0.2 seconds before the front of the EUKV strikes the wall. You will observe the short time interval as the shock wave travels down the train and each of the cars in turn begins to decelerate. The train recoils from the wall at about 1.5m/s vibrating as it does so (note the resonant frequency can be observed - see calculation in section 0). The impact is more or less complete for both the unmodified and modified trains in less than 1s.
Impact Force  - Figure 4 compares compression force levels (N) vs. time. In the unmodified vehicle the impact force quickly rises to the 4MN level when the cars begin to collapse. As the shock wave travels down the train and each car sees the compression load a fraction of a second after the car in front. When the modified vehicle strikes the wall compression loads are initially limited to 2MN until the crash structure completely crushed after about 0.4s and then the load rises to the 4MN level as the cars then begin to collapse.
Acceleration - The net force on each car is calculated from the force information and the mean acceleration obtained by dividing by the mass of the car. This information is presented in Figure 5. prEN 15227 requires that accelerations are limited as far as practical to 5g and should not exceed 7.5g. It concedes that it will usually be necessary to accept higher levels of acceleration in the cab but only as transients lasting less than 5ms.
In the unmodified vehicle acceleration levels peaks at 9.1g and is consistently greater than 7.5g for time periods longer than 5ms. Thus it does not comply with the requirements of prEN 15227.
The modified vehicle shows significantly reduced acceleration levels rising to a peak of 7.6g but generally less than 5g. It is interesting to note that the peak 7.6g acceleration occurs at the point where the crash structure is fully collapsed and the carbody begins to collapse. The peak acceleration is greater than 7.5g for just 3.5ms thus the modified vehicle meets the requirements of prEN 15227.
Survival Space - prEN 15227 also requires that the loss of survival space shall be limited to 1% of the initial lengths.  prEN 15227 also requires us to consider both passenger and crew survival spaces. The un-modified EUKV may carry train staff. The loss of survival space is compared for the un-modified and modified EUKV in Figure 6.