George Lungu’s work with Excel Simulation spreadsheets are highly innovative particularly in the way they transform mathematical problems into live animated models which respond in realtime to user interaction. Their use as teaching tools is, I believe, unsurpassed. His use of Excel features is also highly innovative, take a look at this video explaining how he uses ‘sprites’ with excel to animate his problems.

George told me a little about why he created his simulation problems. He writes "Last year, at the end of August, I just arrived to Phoenix for a contract. It was almost midnight, yet the temperature was over 100°F. As I opened the car door I was hit by this sudden urge to do a U-turn and return to Colorado on the spot. The Mexican guy, dressed in a formal tuxedo, with tie, relaxing on a nearby bench, grinned at me. Seeing my license plate he figured out what was on my mind. I saw no sign of sweat on his face so I assumed he was made out of some tungsten alloy.

Within two weeks I found myself bored to death. My apartment was a sauna despite the air conditioning unit which was humming non-stop. The accelerometers models I created for the company were received with suspicion since they were built in Excel not Matlab or Simulink. Excel is for lowly accountants not for smart engineers or physicist, isn’t it? In my industry there is the commonly held belief that the result of your work is proportional to the price of the software you use. The fact that the speed of these Excel electro-mechanical models was about two orders of magnitude higher than the speed of the existing Simulink / Matlab models while the benchmarked precision was still good, added more gas on the fire.

Few questions arose. Some accused me of using “just a look-up table”.  You cannot possible do differential equations in Excel, could you? That was easy to dismiss since the system of equations is rather large and one would need a huge number of points to be able to tackle the range of all the parameters. The next was, how many people in our (rather large) systems team were needed to be laid off if we shrink a two-day simulation to an hour. The final question was (and here the manager agreed on that one), if the model is so simple (32 columns) and portable in Excel (compared to the existing one) and anyone can take it home and use it without a license, would this go to the competition or even worse, would our clients figure it out and dump us as a modeling source while keeping us only as a part supplier.

My usual night jogging and rattlesnakes whacking in the desert shortly became bland by itself so I decided to put my newly gained Excel diff. equation solving skill to a good use. I first build a 2D planetary system and than I felt the need to convert it in 3D and make it more interesting. Therefore I created a simple rectangle and I slowly figured out how to resize it, shift it and rotate it. No books, no internet, no reading, just thinking.

The second step was to take a point (x,y,z) in an arbitrary system of coordinates, place an imaginary rectangular sheet of glass between my eye and this Cartesian system, take an imaginary gun and shoot the point. The point of coordinates (u,v) where the bullet pierces the glass would be the point on a flat screen which would render a flat but 3D perspective view of the original (x,y,z) point. By the end of the weekend, after lots of scribbling and attempts to remember the high school geometry, I had the 3D-2D conversion formulas and a nice cube which could be zoomed and turned around both vertically and horizontally with the help of Excel spin buttons.

In November 2008, due to the meltdown in the automotive industry many employees were laid off. My contract was prematurely terminated and I left Arizona. The departure was even harder than the arrival. In the meanwhile I fell in love with the mountains around the city, the climate, the fine southern Indian cuisine and the feeling of freedom. Getting back to Colorado I managed to put the 3D conversion knowledge to a good use making an 8-body planetary system with all sorts of features. The fairly simple shapes I was dealing with were not enough to satisfy me anymore. Since a rotating 3D Excel cube was already posted on YouTube, I decided to do something more challenging...an Excel Rollercoaster!"

WARNING: Before you download and run any of George's simulation worksheets please update your version of XLC (see the following article): 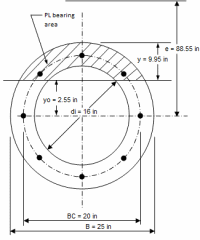