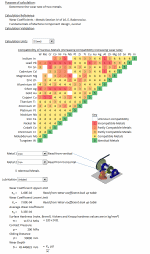 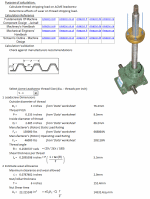 How did Alaska Airlines Flight 261 Fail?


A jackscrew (or screw jack) is a type of jack you will have probably seen stowed in your car but they are used extensively in other mechanical devices. They operate by turning a leadscrew to produce linear motion of a ‘load-nut’. An acme thread form is most commonly used, as this thread is very strong and can resist the large loads imposed on most jackscrews. Jackscrews are self-locking, which makes them intrinsically safer than other jack technologies like hydraulic actuators which require continual pressure to remain in a locked position.  However if not lubricated they can be dramatically weakened through wear. One of our failure investigations concerns such a failure of a jackscrew device. We are bound by confidentiality agreements from publishing details of the investigation but whilst researching another more prominent and more widely reported incident was discovered. This incident had far more devastating consequences but featured an identical failure mechanism to the one we are studying.

ExcelCalcs Repository Calculation 1 - As is our practise we publish any calculations that might be useful to other engineers on the ExcelCalcs site. Clearly we do not publish any confidential information but in the course of our work we produce generic calculations that are likely to be useful for future problems, these we upload to ExcelCalcs. One such calculation determines the adhesive wear rate of two metals which we can apply to our jackscrew investigation. It employs some data published in “Wear Coefficients - Metals Section IV of 10” by E. Rabinowicz and “Fundamentals of Machine Component Design” by Juvinall. It considers the compatibility of various metal combinations. Materials with increased levels of compatibility have an increased tendency ‘weld’ together and a higher wear rate. It also considers the hardness of the material and the contact pressure between the two materials. Reflecting on the incident it is unlikely that unsuitable materials were selected but it is possible that pressure on minimising weight resulted in selection of a smaller leadscrew operating under high contact pressure and a correspondingly high wear rate.

ExcelCalcs Repository Calculation 2 - A second calculation in the repository considers the strength of jackscrew load-nuts and how the strength of the load-nut reduces as it wears. What is particularly interesting is the difference between the wear rates on a lubricated jackscrew are almost 100 times lower than an un-lubricated one. The calculation is a very useful to set an inspection intervals to ensure that un-lubricated jackscrews will be identified before it leads to a failure.  Using the calculation you can identify the most important parameters to decide the best way to enhance the safety of your designs.

The calculations sadly makes it all too clear to see how inadequate maintenance and poor lubrication led to excessive wear and catastrophic failure aboard Alaska Airlines Flight 261. See BBC News Coverage of the incident.