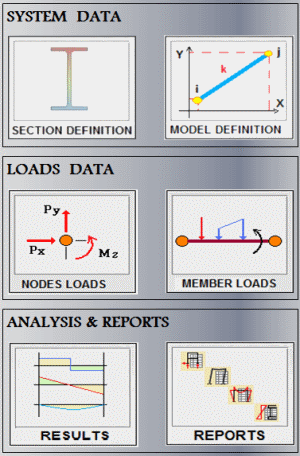 Full download access to any calculation is available to users with a paid or awarded subscription (XLC Pro).
Subscriptions are free to contributors to the site, alternatively they can be purchased.
Click here for information on subscriptions.
Comments: 25
×

rgordon 11 years ago
Mr. Babacan,
I believe that did the trick! Thank you! I am getting symmetrical loading across all members of the structure (including member #17). I appreciate your putting in the time on a 2003 tool for those of us that are still working on the older MS platform.
Thanks you for being so responsive. It has been very helpful.

BABACAN 11 years ago
Mr. Gordon.
now improved.
Please be sure to check back.
Best regards.

rgordon 11 years ago
Thank you for looking at that Babacan! Values are much improved for member #17. I am still seeing substantially higher values for that member. It is as if it is picking up a "ghost" loading on that member. I also see slight ripple affects across other members. Do you think there may be another contributing issue? Thanks again. This is a very impressive effort.

rgordon 11 years ago
Thank you for a very useful too! I am running into some problems though with member 17 results. It appears there may be a calculation error? I have tried multiple frame arrangements and I continue to get output sometimes 100 - 1000x what I am getting for other members. I am working with a symmetric frame and I am not getting any error for the corresponding member on the other side even with symmetric loading and the same bounding conditions (XYM for both). Could you take a look? The calcs are locked and I am not able to easily locate the problem. Thank you!

BABACAN 12 years ago
Turan Babacan has sent a new version of EXCsta2D. It has an improved user interface improved user interface and results presentation. As you can see from my previous comments I cannot praise this highly enough. I enjoy just marvelling how Turan uses Excel in such an innovative way. Turan teaches me many new Excel tricks. This is truly great 2D beam analysis method and an essential download for all engineers.
Turan write to tell me a little about himself. "I was born in Trabzon in 1964. I am a civil engineer. I do amateur software since 1986. C + +, VB, VBA, Prolog and Fortran languages I know. From the project since 1990 and am working in the manufacturing sector. "Steel buildings, Substructure and road engineering," I'm experienced Excel is my hand up my arm. I am currently working in Istanbul."
Turan we are delighted to have such an accomplished user sharing his work on the ExcelCalcs site. Thank you.
Download link to Repository:
EXCsta2010.xls

BABACAN 13 years ago
17. resolved the problem element. (Thanks, Robert Gordon)

BABACAN 13 years ago
Praise where praise is due Babacan. I have been investigating the spreadsheet further un-protecting worksheets, un-hiding worksheets, rows and columns so that I can see how you constructed the spreadsheet. It is like a master class in the use of Excel.
I like to see all parts of the calculations so that I can appreciate what is going on. It gives me increased confidence in using a workbook if I know what it is doing. I wonder if you have any objection to me posting the calculations in this form?
All worksheets are password protected without a setting a password (presumably to prevent accidental editing) but I notice that the 'DEVELOPERS' worksheet is password protected with a password. Is there any reason for this?

BABACAN 13 years ago
Thank you john.:blush: Embarrassed. Because of this praise. "3D" 'I'll try to be worthy of the praise. Good night.

BABACAN 13 years ago
Bravo Bravo Barvo! What a phenomenal spreadsheet. I love it. You are indeed a spreadsheet king BABACAN. Well done!

BABACAN 13 years ago
BABACAN I am afraid I am still getting the #NA error in spreadsheet cells.

BABACAN 13 years ago
Mr John Doyle, I think I've solved the problem. I hope it works this time

BABACAN 13 years ago
I have uploaded your 3D frame calculation EXCsta_3D.xls

Users have been invited to comment in a separate forum thread here.

BABACAN 13 years ago
BABACAN I think all your work is excellent. Your calculations are well laid out and expertly executed. Your documents use Excel features in an innovative way (I particularly like your implementation of symbols in excel charts). It is just a shame that I cannot get EXCsta2010.xls to work (it is frustrating because it is clearly working on your machine and I can't figure out why it is not working on my machine or InfoJunkie65's machine).
Your EXCsta_3D.xls seems like another great sheet. I have been marvelling at your 3D sketching and rotational controls. I look forward to seeing the completed version. Both calculations would make excellent teaching tools for finite element analysis. I'll up load the EXCsta_3D.xls calculation as a work in progress and invite other users to comment.

BABACAN 13 years ago
Mr John Doyle
After reading your comments,
I'm working on hold EXCsta_3D software.
I would add for your review.
do you still want from me?
What are your suggestions?
Thank you.

BABACAN 13 years ago
Thanks for all your helpful comments InfoJunkie65. With regard to your comments about the use of VBA to solve frame problems I thought that you might like to take a look at one of Doug Jenkins calculations. I think it is just the thing you are looking for.
Frame4.xls

BABACAN 13 years ago
Its a real shame I can't get the calculation working because it is superb. Maybe something has been lost in translation? When I view the calculation I see all the English equivalents of the Turkish function calls you have used. I would be interested to know if any other users manage to get it working. If I get a bit of time I'll try to workout what is going wrong.

InfoJunkie65 13 years ago
Appears can only handle one load case, but good learning tool. Just a matter of interest DOS program with GUI 165kB, Excel Workbook 3.6Mb. Amazing what can be done in excel, but not always best tool to use.

BABACAN 13 years ago
I made a simple change to the calculation by increasing the size of a load which triggered a recalculation and the return of the #NA errors just as I had seen in Excel 2010. A #N/A error which occurs when a value is not available to a function or formula. Have you got a special toolpak loaded into Excel like the analysis toolpak or the solver add-in? Or are you aware of any special functions calls?

BABACAN 13 years ago
Originally I opened the file with Excel 2010 and saw the #NA errors. Following your post I decided to open the file in Excel 2003 and it worked perfectly. I am really quite amazed with what you have achieved here BABACAN. It is a joy to use. I particularly like how you display member shear force and bending moments. Your marvellous spreadsheet seems to be full of Excel tricks and wizardry. I am enjoying going through it just to work out how you pulled it all together. I would like to thank you again for uploading this exemplary excel calculation. Bravo!

JohnDoyle[Admin] 13 years ago
This is a fantastic worksheet. Every Engineer should grab a copy.

BABACAN 13 years ago
Mr John Doyle
#N/A I do not understand what it is.
I have prepared as fully explained.
Thank you for your interest.
Note: I do not work for awards.

BABACAN 13 years ago
BABACAN this looks to be a superb spreadsheet and I am delighted to award you with a free XLC Pro(12M) subscription. I do have a few things to point out:
1) I see that the spreadsheets are protected but they can be unprotected without entering a password.
2) Row and column headings are hidden.
3) I have not figured out a way to see the results page. All I have in cells is a #N/A error which occurs when a value is not available to a function or formula. This confuses me a little because you say that no macros are used?
I would be grateful if you could help me get up and running with the spreadsheet.