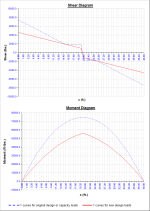 This download is for Registered Users Only.
Perhaps you need to login or register.
Comments: 18
×
ATomanovich 6 years ago

debest 6 years ago
Hi Alex - I believe this program is based upon the 2005 SJI tables. Is it possible to have it updated to the 2010 SJI tables? Thx Doug

hades3 9 years ago
Thanks
ATomanovich 12 years ago
Jahan,
While your question is not related to this thread on the JOIST.xls workbook, nevertheless I will answer it here.
Yes, I have a workbook called "FOOTINGS.xls", which is pretty handy for footing analysis and design. The workbook can be found under "Strength", and then "Structural Details" sections of the Calculation Repository. Look on page 3.
The workbook is in "English" units. Sorry, but that's my "cup of tea", as they say. (lol)
Alex
ATomanovich 12 years ago
Thank you.
ATomanovich 12 years ago
Thank you Alex for the information.
Please help me know if we have an ExcelCalc file in order to analyze and design a single footing.
Thank you
JAHAN
ATomanovich 12 years ago
Jahan,
The last mumber in a (Steel Joist Institute) joist is the "section designation", 1 through 12. The higher the number, the heavier the joist (wt./unit length), and the more distributed load it can safely carry. It used to be common place to refer to joists simply as "bar joists", because many times the members of joists were composed of bars/rods. The last number does not refer to a particular angle size, and has nothing to do with the specific member sizes.
I have done some retro-fit work in the past at existing facilities where roof joists were utilized. If you cannot obtain the shop drawings from the original joist vendor, then one has to literally take field measurements of the sections making up the joist. Also, if you do not have the original shop drawings or building project specifications, then you are faced with the question of the yield strength of the materials that were used in fabrication of the joists. Usually if you know approximately when the building was constructed, a call to a local joist vendor can be of some help.
Hope that helps.
Alex
ATomanovich 12 years ago
Alex I have noticed a question for you relating to joist.xls. It was not posted in this thread of the forum.
The original is here.